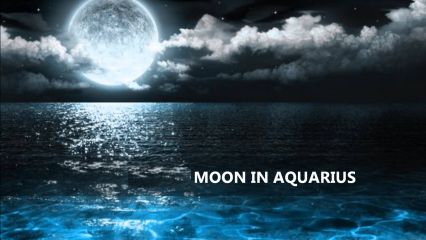 Although rather sociable, they are often loners at heart. Many have strong egos, or at least powerful defense mechanisms, and most Lunar Aquarians will do their best to be the most unique and unusual person they can be. Their inner feeling of loneliness-that they don't quite fit in-puts them on the outside, looking in. Lunar Aquarians generally make wonderful friends. They'll make a point of leaving nobody on the outside. Many will fight for other's rights and crusade for equality.

There is a very idealistic and progressive streak in Lunar Aquarians that is admirable indeed. However, when the Moon is in Aquarius, natives often will deny the more irrational qualities of emotions-such as jealousy, possessiveness, and fear-in an effort to be "above" what they consider "pettiness". When this goes too far, Lunar Aquarians can be emotionally blocked, distant, and detached.

Lunar Aquarians can be very willful, especially in childhood. With age, these natives generally learn to handle their strong needs. Their desire for independence is powerful indeed, no matter what their age. With a quiet Sun and/or Ascendant, their desire to "shock" others is not always apparent until a relationship becomes comfortable. They are generally proud of their family members, boasting just how unique they are. When their families are ultra-conservative, the boast will be that they rebelled against all of that! 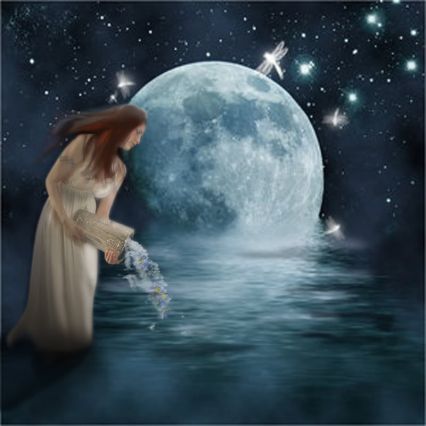 The Aquarian tendency to be humanitarian shows up powerfully in Moon in Aquarius. However, their kindness and concern for others is generally more a broad philosophy of life. With people close to them, Moon in Aquarius natives can seemingly lack compassion, as they often fully expect others to be as independent and detached as they are! In close, personal relationships, however, Lunar Aquarians generally give others a lot of personal freedom, and they will tolerate and enjoy all kinds of idiosyncrasies in people around them.

Moon in Aquarius people are rarely flighty people, but they can be unreliable when it concerns the little things in life. Often, this is simply an assertion of their independence. In the long haul, however, they are rather constant, as Aquarius is a fixed sign. As long as they have their own space and the freedom to be themselves, however kooky that may be, they are trustworthy and loyal.

These sometimes maddeningly unpredictable people are nevertheless quite charming. They have an unmistakable stubborn streak, but when left to be themselves, they make unusual and endlessly interesting people to be around. Life just wouldn't be the same without Lunar Aquarians' unusual spin on the world and the people in it!

In the period from early morning 26th April begins constellation of the New Moon in Taurus, which is a symbol of a new beginning.