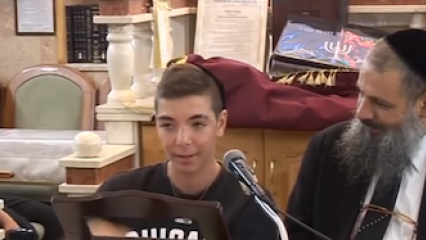 Jewish 15 year old boy who had a prophetic vision during his Near Death Experience reveals what he saw. This boys vision has taken many in Israel by surprise and the information he reveals is interesting.

This boys vision has taken many in Israel by surprise and the information he reveals is interesting. While we can not know with 100% certainty if this is of God or not, I do think we should at least ponder his experience. Here is the boys vision in its full….
"So are miracles, like the vision the young teen had for today, or are they just a thing of the past? This seems to be the question looming in the minds of many in our generation today. Some well-known Biblical authors claim miracles and the supernatural are no longer prevalent in our society, while others tell us that they are. Only one can be right? Who is it?

Before I go any further, I want to tell you what God did for me personally. When I was only eight years of age, the doctor informed me that I was going deaf. My mother and father were believers in Jesus and knew God had other plans for me, so they decided to bring me to church for prayer. Upon arrival, the members of the church laid hands on me and prayed. That night my ears were miraculously healed; the doctors themselves could not believe it! God had done a miracle in my life and because of that I know with 100% certainty that God still works miracles today, just as He did in Jesus’ day.

But I’m left with one lingering thought, “Why then do we rarely see miracles?” The answer, quite shockingly, is this… We tend to pawn miracles off as some sort of “mere coincidence.” We take what can only be a miracle of God and pawn it off on science or the possibility of mere chance. We have been so brainwashed to believe in a non-supernatural God that we take miracles for granted when they do happen and we don’t give God the credit he deserves. Other times we assume since we have never seen ears growing back, a lame man walking, or the blind seeing, etc. Than we assume God no longer performs them, simply because we haven’t physically observed them.

“A persons faith will be strongest in the area in which they have the greatest revealed knowledge from God. However, on the opposite end, your faith will be weakest where you lack revelation or have little of it.”