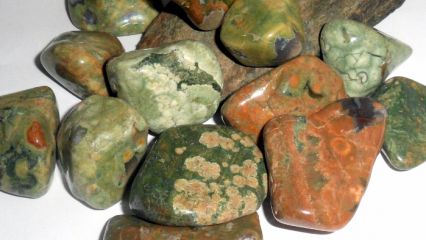 asper is a stone of protection, used by Shamen. Supreme nurturer, balances and stabilizes. Jasper has been used to ensure safe astral travel, and for dowsing. Jasper heightens awareness. Helps to cleanse and eliminate negative energy.

The name 'jasper' is derived from the Greek word for 'spotted stone', referring to its typical multicolored, striped, spotted or flamed appearance. Jasper can form in virtually any color. Jasper is usually considered a chalcedony, but some scientists classify jasper as a separate type because of its distinctive grainy structure.Jasper is a dense substance, up to twenty percent of which can be made of foreign materials. Due to these trace impurities, jasper is rarely uniform. In some cases, jasper may even grow together with agate or opal. The patterns of jasper are formed during the process of mineral consolidation, determined by the exact flow and deposition of silica-rich sediments or volcanic ash.

Jasper is often modified by other intruding impurities. As original deposits of silica materials naturally form with fissures and cracks after deposition, they are later filled by other minerals, such as iron oxide, manganese dioxide, metal oxide and sometimes organic matter. The final settling of these materials determines the specific appearance of the final substance. The most common jasper patterns include interesting marbling and veining, orbital rings, streaks, spots, flaming and banding. Like agate stone, there are numerous trade names and classifications used for jasper today. Corresponding Astrological Sign: Leo,