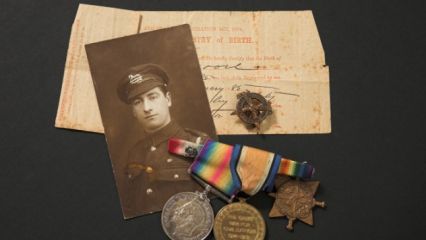 The astonishing case of Edward Austrian began when the toddler showed a terrible phobia of dark, gray, drizzly days. He told his mother that he had been a soldier in World War I at such a young age that he shouldn’t have even been aware of that conflict yet.

Patricia Austrian’s four-year-old son Edward had a phobia of drizzly, grey days. Then he developed a problem with his throat and started to complain of severe pain. Whenever he had a sore throat, he said that his “shot was hurting.” Edward told his mother very detailed stories about his previous life in the trenches in what was apparently World War I. He told her that he had been shot in the throat and killed.At first doctors could not find a cause for his sore throat and removed his tonsils as a precautionary measure. A cyst developed in his throat and doctors did not know how to treat it. As soon as Edward was prompted to tell his parents and others more about his previous life and talk about how he was killed, the cyst disappeared. Edward’s doctors never found out why the cyst had vanished.

After telling the story and describing his manner of death with such certainty, Edward’s throat cyst disappeared. His parents initially passed it off as nothing more than the overactive imagination of a child until they had to admit that they couldn’t explain how his cyst disappeared with that perfect timing. Edward’s case is a striking example of how releasing the memories of past life trauma instead of bottling them up can facilitate a physical healing process of related symptoms.

How to clean your Aura?