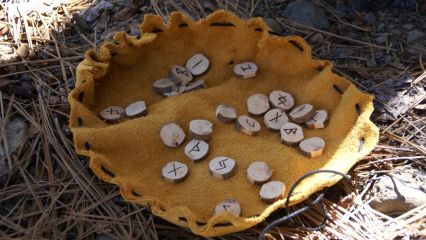 Yet although very many thousands of runic artifacts have been discovered across Northern Europe, few people nowadays use them much for this, apart from inscriptions of some special meaning. Runes were definitely used for magical purposes. Not only is this use described in ancient writings such as the Eddas, there have been many artefacts found whose runic inscriptions do not make linguistic sense and whose purpose can only be understood in terms of magic. Unfortunately the ancients left scant instructions on how actually to use runes for magical purposes! Some people in modern times have experimented with rune magic and have attempted to rediscover these arts.

One historical magical use of runes was in healing. Egil's Saga was written about 775 years ago, and describes events that happened 250 or more years earlier. When the subject of the story, Egil, visits a farm, he finds that the farmer's daughter is sick and has been wasting away for some time. Egil asks whether anything has been done, and is told, "Runes have been graven, and it is a farmer's son a short way off who did that; but ever since it has been far worse for her than before." Egil then finds the runes carved on a piece of whalebone in the bed. He scrapes the bone clean and burns both it and the shavings. Then he carves new runes, laying them under her pillow, and she quickly becomes well.

Egil says (in poetry), "No leech should unleash runes save rightly he can read them. Of men it happens to many a mirky stave benights him. Well, spied I on scraped whalebone ten secret runestaves graven. Those to leeklinden maiden brought wasting all too lasting." (Egil's Saga - translated from the Old Icelandic by Jones.) Nowadays, runes are sometimes used for healing. Practitioners have discovered how to use runes to tap energies which can be directed magically. 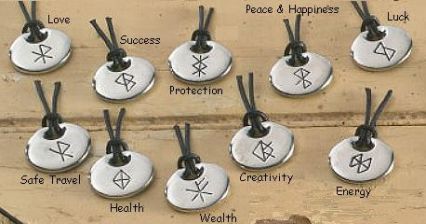 What do people use runes for mostly nowadays? Divination. Yet this is strange, for there is NO historical evidence that runes were ever used for divination! If fact there is no evidence that runic divination was ever practised before the late 20th century, from around 1970 onwards. The Roman Tacitus, writing 1,900 years ago about the customs of Germanic tribes, describes a divination technique which is supposed by some to describe the use of runes. "For omens and the casting of lots they have the highest regard.

Their procedure is always the same. They cut off a branch of a nut-bearing tree and slice it into strips; these they mark with different signs and throw them completely at random onto a white cloth. Then the priest of the state, if the consultation is a public one, or the father of the family if it is private, offers a prayer to the gods, and looking up to the sky picks up three strips, one at a time, and reads their meaning from the signs previously scored on them." (Germania - translated from the Latin by Mattingly.) These "signs" (or notæ in the original Latin) could be anything, and it's only wishful thinking that would make them runes. 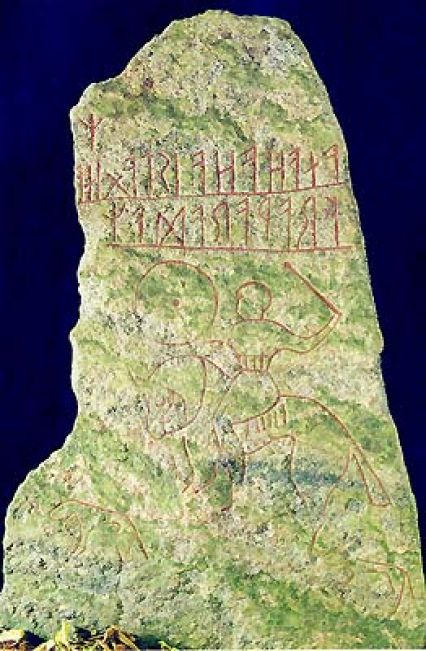 Yet since it is possible to do successful divination with almost anything provided you know how divination in general works, divination with runes has become very popular. It takes advantage of the meanings of the runes. Each rune has at least one meaning. Most have many meanings linked by a common thread. These meanings exist because the runes are more than just graphical symbols. They are also symbols in the same sense that dreams may contain symbols or a poem may contain symbols. They stand for things, objects and actions, but they can also stand for values - the values that pervaded the Germanic society of earlier tribal times.

The runes can also be used to gain an insight into the values of the Germanic peoples of Northern Europe during the Dark Ages. They can be used in meditation and in healing. They can be used in magic and in divination. Certainly a whole lifetime could be spent in learning about them and using them. And though the most popular use at present is divination - "Casting the Runes" - this represents but a part of their potential.

We must ask ourselves in meditation, directing our attention with the target (be it a person or an intention), to create a union with our being interior.