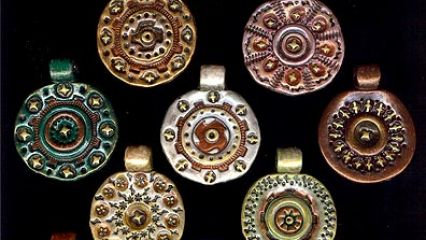 The ancient Egyptians had many amulets for different occasions and needs, often with the figure of a god or the "ankh" (the key of eternal life); the figure of the scarab god Khepri became a common amulet too and has now gained renewed fame around the Western world. Some forms of Buddhism have a deep and ancient talismanic tradition. In the earliest days of Buddhism, just after the Buddha's death circa 485 B.C., amulets bearing the symbols of Buddhism were common.

Symbols such as conch shells, the footprints of the Buddha, and others were commonly worn. After about the 2nd century B.C., Greeks began carving actual images of the Buddha. These were hungrily acquired by native Buddhists in India, and the tradition spread. In Thailand one can commonly see people with more than one Buddha hanging from their necks.In certain areas of India, Nepal and Sri Lanka, it is traditionally believed that the jackal's horn can grant wishes and reappear to its owner at its own accord when lost. Some Sinhalese believe that the horn can grant the holder invulnerability in any lawsuit. 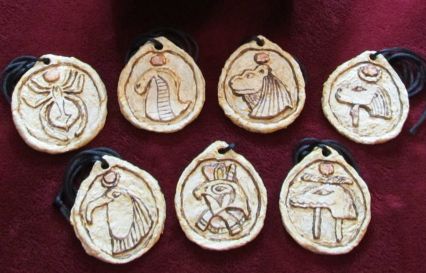 In the Philippines, the local amulet is called agimat or anting-anting. According to folklore, the most powerful anting-anting is the hiyas ng saging (directly translated as pearl or gem of the banana). The hiyas must come from a mature banana and only comes out during midnight. Before the person can fully possess this agimat, he must fight a supernatural creature called kapre. Only then will he be its true owner.

During holy week, devotees travel to Mount Banahaw to recharge their amulets. An ancient tradition in China involves capturing a cricket alive and keeping it in an osier box to attract good luck (this tradition extended to the Philippines). Chinese may also spread coins on the floor to attract money; rice also has a reputation as a carrier of good fortune. In Bolivia and Argentina, the god Ekeko furnishes a standard amulet, to whom one should offer at least one banknote or a cigarette to obtain fortune and welfare. 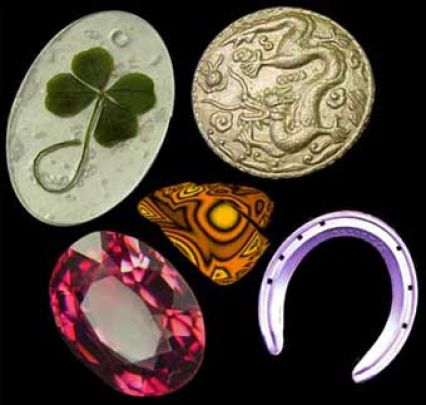 In Afro-Caribbean syncretic religions like Voodoo, Umbanda, Quimbanda and Santeria, drawings are also used as amulets, such as with the veves of Voodoo; these religions also take into account the colour of the candles they light, because each color features a different effect of attraction or repulsion. In Central Europe, people believed garlic kept vampires away, and so did a crucifix. For the ancient Scandinavians, Anglo-Saxons and Germans and currently for some Neopagan believers the rune Eoh (yew) protects against evil and witchcraft; a non-alphabetical rune representing Thor's hammer still offers protection against thieves in some places.

Deriving from the ancient Celts, the clover, if it has four leaves, symbolizes good luck (not the Irish shamrock, which symbolizes the Christian Trinity). In the celtic tradition a bag made from a crane skin (called a crane bag) symbolized treasure, a wheel symboled the sun, a boat also was a sun symbol, but also a death symbol (to the land of the dead), the raven was a symbol of death, the head was a symbol of wisdom as was the acorn and a well.

Whether called a Harmony Ball, a Bola or Druid Ball the similarities are that it is seen to be a piece of jewellery, it includes a chiming ball and in most cases has cultural, regional and family heritage significance.