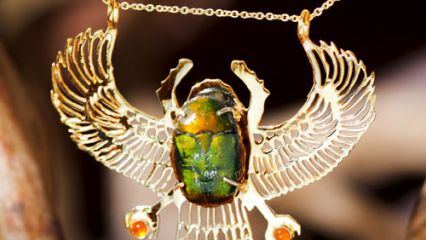 The Scarab Beetle is one of the most common symbols in ancient Egyptian amulets and art works. It is also a a perfect and unique symbol of the ancient creation Egyptian myth and religion.

The scarab beetle has a famous habit of rolling balls of dung into small holes in the ground, laying its eggs inside the balls so that the larvae could use them for food. When the dung was consumed and the young beetles came out the Egyptians considered it a "spontaneous creation" thus worshipping this beetle as the god "Khepera", meaning "The one who came forth" â€“ the creator god Atum. In ancient Egypt they used to use amulets containing the beetle, placing them on the chests of mommies, close to the heart.

The winged Scarab beetle was to ensure a safe passage to the world of the gods, rebirth and good luck in both present and after life.The Hebrew writing on the back of the pendant says "Amon Rah untill infinity" ("Amon Rah millyonei shanim", in Hebrew). This phrase, taken from the Egyptian tradition, symbolizes the belief in the eternality of the soul. In ancient Egypt they used amulets depicting the beetle, placing them on the chest of mummies, close to the heart. The image of the beetle itself rolling the ball was a perfect depiction for the ancient Egyptians of the movement of the sun and therefore of the cycle of life and creation.