What is a Talisman? 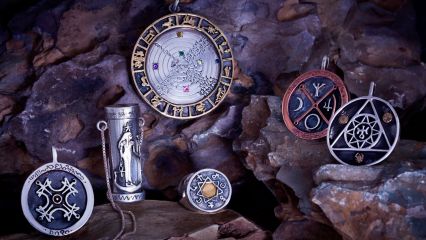 A talisman is an object which is believed to contain certain magical properties which would provide good luck for the possessor and possibly offer protection from evil or harm. The word comes from the Arabic word Tilasm meaning "completion, religious rite".

According to the Hermetic Order of the Golden Dawn, a magical order active in the United Kingdom during the late-19th and early-20th centuries, a talisman is "a magical figure charged with the force which it is intended to represent. In the construction of a talisman, care should be taken to make it, as far as possible, so to represent the universal forces that it should be in exact harmony with those you wish to attract, and the more exact the symbolism, the easier it is to attract the force.

All the traditional magical schools advise that a talisman should be created by the person who plans to use it. They also recommend that the person making the talisman must be familiar with all the symbolisms connected to all the different planetary and elemental forces.

In several medieval talismans, geomantic signs and symbols were used in relation with different planets. These symbolisms which are frequently incorporated in geomantic divination, also have alchemical implications. Other magical associations, such as colors, scents, symbology, patterns, Kabbalistic figures, can also be integrated in the creation of a talisman.

However, they should be in synchronization with the elemental or planetary force selected to represent the talisman. It is also feasible to augment a personal touch to the talisman through adding a verse, inscription, or pattern. These inscriptions can be magical emblems, bible verses or sonnets.