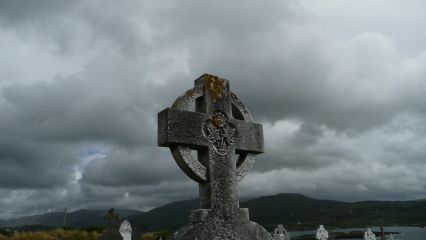 Celtic Cross is probably the oldest and most popular pattern for reading the tarot. It has survived so long because the layout of the cards is simple, but powerful. A strong energy has built up around this spread due to its use by so many people over the years.

You can think of the Celtic Cross as divided into two sections: the Circle/Cross (six cards) on the left, and the Staff (four cards) on the right. The Circle/Cross simulates the Celtic cross found throughout Ireland. This cross has a circle linking the four perpendicular spokes. The circle and cross symbolize the joining of spirit and matter and the unity of all events in time. Spirits of the air, wind, woods and flowers, fairies and elves that open the magic world of dreams for men. These charming creatures are part of the imagination since the night that dates back to days of the Celts.

The feminine energy of the circular section works in unison with the masculine energy of the Staff section. These two parts of the Celtic Cross mirror the dual nature of manifested reality - the polarities that abound in the human psyche. The Circle/Cross section is made up of two crosses - a central one (two cards) nested within a larger cross (six cards). The smaller cross represents the heart of the matter - what is most central to you at the time of the reading. It is the hub around which the wheel of your life is turning. 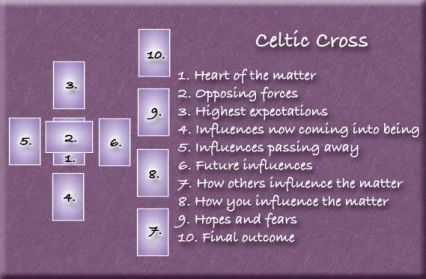 There are a number of versions of the Celtic Cross. The differences are usually in cards 3-4-5-6. This game of cards show a way, which is the game of life and each card includes a secret that will be uncovered for the consultant at the right moment, when the cosmos decides to respond; in this game, cards may be guessed. As every Oracle, it may be used in different situations, to inspire us in view of certain problem, to try to figure out which is the best way to follow in view of certain situation, as a guide or comfort.