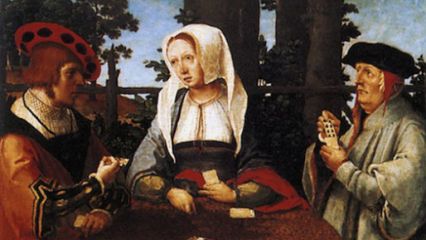 It has been said that the first Tarot deck was created as an amusement for Charles VI of France. There is a Tarot deck on display at the Biblioteque Nationale de France, however the hand painted cards appear to be Italian in origin and from the fifteenth century rather than the fourteenth as previously thought. Jacquemin Gringonneur was commissioned to paint three decks of cards for Charles VI in 1392, but they were most likely regular playing cards. The designs of the 22 cards in the Major Arcana can be traced back as far as 1440, when the first known deck appeared in Italy. The 3 decks called the "Visconti Trumps" are generally regarded as the "forefathers" of the decks that are widely available today.

It is believed that they were originally created as a game for Nobles. It is not until centuries later that the cards reemerged, this time as a tool of divination. In the latter half of the 15th century, the cardmakers in Marseilles, France began to standardize the Trumps. Before this organized production, those who played the Trumps could dictate which they wanted to include, and which they wanted substituted or eliminated. Certain cards; Death, the Devil, and the Tower in particular; were considered offensive by the more conservative Nobles. These images caused religious leaders to attempt to ban the Trumps.

The first account of divination through the use of cards is attributed to cartomancer Jean-Baptiste Alliette, better known as "Etteilla", in 1770. He was the first to publish divinatory meanings for cards, and only 32 cards (plus one, representing the querent) were included in this edition. At this time, only regular playing cards were mentioned. Later, Etteilla published several works that involved the Tarot Trumps specifically. It is no surprise that these later writings coincided with deGebelin's then-recently-public treatment of the Tarot as a wellspring of Egyptian occult knowledge. Etteilla must have anticipated the Tarot's jump in popularity: his was the first deck available to the public expressly for the purpose of Cartomancy.

In the nineteenth century, the famous occultist known as Eliphas Lévi developed a correlation between the Tarot and the Kabbalah: the Hebrew system of mysticism. This fueled a new belief that the Tarot originated in Israel, and contained the wisdom of the Tree of Life. The new theory brought all 78 cards together as keys to the mysteries, but again, there were no concrete facts to support it. Nevertheless, something important was accomplished. The theory would later serve as proof that the symbolism of the Tarot crossed all boundaries. From this point forward, many magical and esoteric groups recognized the Tarot as a timeless body of knowledge that had significance in every mystical path. 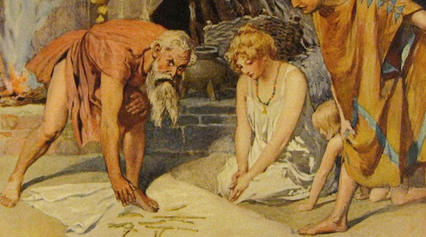 The Theosophical Society, the Hermetic Order of the Golden Dawn, the Rosicrucians, the Church of Light, and the Builders of the Adytum (B.O.T.A.) all secured the Tarot's position in the 19th and 20th centuries. In the United States of America, the Tarot became popular and more readily available in the 1960's, when a period of exploration in spirituality began. In the opinion of many learned Tarot enthusiasts, the most significant change the deck has experienced is Smith's treatment of the Minor Arcana. Hers are the first "pip" cards to contain images depicting the meaning of the cards. These graphics allow readers to explain the significance of each cards nuance to querents who, in most cases, have never encountered the cards before.

This artistic trend can be traced through the majority of the decks produced after the Rider-Waite (1910), and Smith's influence is readily recognized, as many of the images echo her drawings. Today's Tarot card designs reflect specific trends in sexuality, religion, culture, and philosophy. There are literally hundreds of interpretations, and more are being conceived as this is being written. The diversity of the styles allows Tarot Readers to choose a deck that suits their personalities, the subject of the reading, the person receiving the reading, or any other variable as they so choose. Certain decks have a serious tone, some have a dream-like quality, others are full of cartoon images. The true beauty lies in the Tarot's ability to retain its "soul" through each metamorphosis and incarnation.

Reading through the meaning of each Tarot card, it is common to wonder where the interpretations originated from.