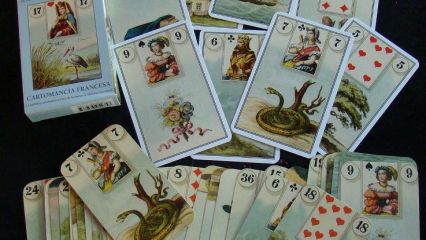 Lenormand deck consists of 36 numbered cards. For the Lenormand, it's more objective about what people are doing and the results, a more objective view of the nouns in the situation rather than the verbs. It's like watching a chess game: who is doing what to whom. It is more like seeing things above, with less context required in the querent's question because the context is in the reading itself.

With the Lenormand, there are also ways of bouncing around within a spread (mirroring, knighting, using the houses) so that you can continue to see more and more layers by blending different pairs of cards all over the same spread. With tarot, you might get the 10 of swords for an ending (a painfully devastating one), while the Lenormand would give the same message through the more neutral Rider and Path (new direction, movement on). It might throw in a whip to add a "bite" to it if it wants you to know that the ending might smart.