The power of Tarot 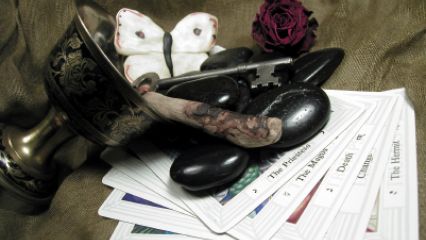 Magic has been described as the science and art of causing change to occur in conformity with will. One of the practices that ceremonial magicians often engage in is the Tarot cards reading.

Like others before us, we learned early in our esoteric studies that a tarot reading was not just a snapshot of some unalterable destiny; a tarot reading simply provides the reader with tools to help analyze a specific situation or problem and offers a possible solution. Because human beings have free will, we are in charge of our own destiny. The tarot simply offers us another perspective, usually a higher perspective. We can choose to follow the road map that a tarot reading provides us, or we can choose to not follow it.

The magician always invokes the highest divine names first, and then proceeds to invoke the corresponding archangels and angels, right down the chain of command. Since each card of the tarot is associated with specific divine powers, including archangels and angels, these spiritual beings are called upon to consecrate the cards, transforming them from mere divinatory tools into potent magical talismans designed to attract the powers that they represent. Many of the tarot angels are known to us only through their astrological attributes and functions, as described in medieval grimoires and more recent magical texts.