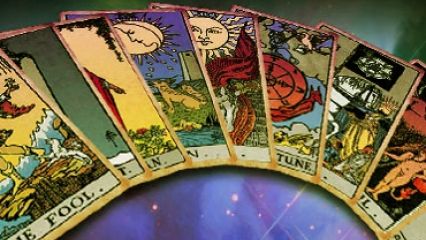 The tarot is one of the most fascinating of all western mystical traditions and been used for centuries for divination and meditation. Tarot can provide doorway to the mythic aspects of our minds and souls. It can help us develop our psychic and spiritual potentials.

The tarot- first known as trionfi and later as tarocchi, tarock, and others) is a pack of playing cards (most commonly numbering 78), used from the mid-15th century in various parts of Europe to play a group of card games such as Italian tarocchini and French tarot. From the late 18th century until the present time the tarot has also found use by mystics and occultists for divination.

Like the common deck of playing cards, the tarot has four suits (which vary by region, being the French suits in Northern Europe, the Latin suits in Southern Europe, and the German suits in Central Europe). Each of these suits has pip cards numbering from one (or Ace) to ten and four face cards (King, Queen, Knight, and Jack/Knave) for a total of 14 cards. In addition, the tarot has a separate 21-card trump suit and a single card known as the Fool.

The first known documented tarot cards were created between 1430 and 1450 in Milan, Ferrara and Bologna in northern Italy when additional trump cards with allegorical illustrations were added to the common four-suit pack. These new decks were originally called carte da trionfi, triumph cards, and the additional cards known simply as trionfi, which became "trumps" in English.

The first literary evidence of the existence of carte da trionfi is a written statement in the court records in Florence, in 1440. The oldest surviving tarot cards are from fifteen fragmented decks painted in the mid 15th century for the Visconti-Sforza family, the rulers of Milan.[8] During the 16th-century, a new game played with a standard deck but sharing the same name (triomphe) was quickly becoming popular.