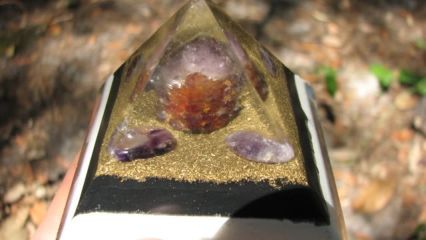 Orgonite is primarily made from metals chips (Copper, Brass, Aluminum curls & etc), polyester resin (fiberglass resin) and a quartz crystal. These devices are not like the old orgone accumulators, which accumulate orgone, irrespective of it being negative or positive. Orgonite however, works continuously to transmute or process negative orgone/chi/qi or other energies into positive form only. Organic substances attract and hold Scalar / Orgone charge, while metallic substances tend to repel it. Basically, Orgonite pulls in the Bioenergy, and while the energy is inside the device, The metal particles and organic resin both push and pull on it in all directions at the same time. This puts friction on the energy.

The friction is great enough at many small points within the matrix to cause the energy to shift upwards in spectrum to Aether, so that it temporarily ceases to exist as a part of the electromagnetic spectrum. When the energy comes back out of the device, it collapses back into an organized, defined state and comes into existence as bioenergy / magnetism. Quantum physicists have discovered that subatomic particles pop in and out of existence as they shift state back and forth between the states of matter and Aether. The same effects take place with waved energies in the electromagnetic spectrum. Different forms of energy appear and disappear as they shift in spectrum back and forth between Aether and lower spectral forms of energy. 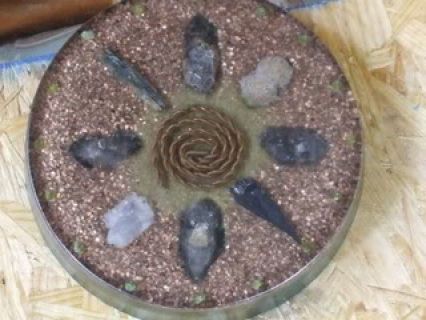 There are many variations on the basic concept of suspending the metal within the organic element (as opposed to using thin layers of organic and metallic substances like in an orgone accumulator), and many other substances which can be added to the mixture to make it more potent, or to specialize it for different applications. Most of the people producing orgonite wind up developing their own exact recipes. At the end of the day, the basic, fundamental ingredients of orgonite are metal particles,quartz crystal and an organic medium to suspend them in, usually resin.

Orgone energy, the creative force in nature, is not a form of electromagnetism nor of matter but is fundamental to both. It is the specific life energy, but life is only one particular manifestation of it. Our knowledge about it is partial and fragmentary in major respects, and is no doubt in some measure erroneous. Nevertheless, a clear and consistent picture of what orgone energy is and how it functions arises from Reich’s work. The following ten properties of orgone energy were deduced by Reich.

1. It is mass free. Orgone energy itself has no inertia or weight; i. e., it is mass free. This is one of the reasons it is difficult to measure using conventional techniques. Mass is, however, intimately dependent on the characteristics of the mass-free orgone energy field with which all matter is surrounded. Measurements of weight or inertia reflect the characteristics of this field as well as of the object contained in it. 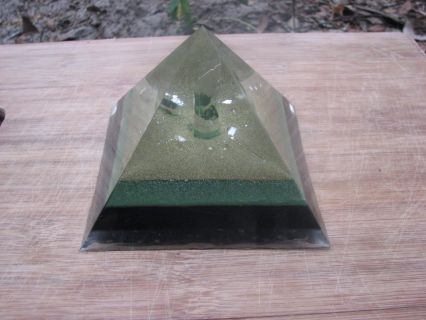 3. It is the medium for electromagnetic and gravitational phenomena. Again, like the ether., orgone energy is the substratum of the most fundamental natural phenomena. It is the medium in which light moves and electromagnetic and gravitational fields exert force. One of the major tasks of orgonomy is to integrate our knowledge of orgone energy with the facts about those phenomena known to orthodox physics.

4. It is in constant motion. The continual motion of orgone energy can be observed under appropriate conditions. There are at least two characteristic types of motion, a pulsation or alternating expansion and contraction, and a flow, normally along a curving path. 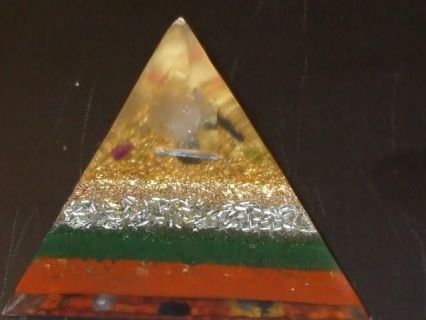 5. It “contradicts” the law of entropy. Orgone energy is attracted to concentrations of orgone energy. Unlike heat or electricity, which always show a direction from higher to lower potential, orgone energy flows from lower orgonotic potential to higher. In a thermal system in which outside energy is neither added nor subtracted, heat is lost by hot objects or materials and absorbed by cool until everything within the system is the same temperature.

“Entropy increases” as the heat is distributed more and more uniformly. Heat, after all, leaves the sun and goes out into space; it does not collect from space and flow into the sun. In the same way, a heater radiates heat into the room; heat does not flow from the room into the heater. These processes are in accordance with the law of entropy.

Orgonotic processes work in the opposite direction. High concentrations of orgone energy attract orgone energy from their less-concentrated surroundings. “Entropy decreases” as orgone energy is distributed more and more unevenly.

It would be a mistake to think that the flow of orgone energy from lower to higher potential is only the reverse of the law of entropy or to try to represent these processes by thermodynamic equations by reversing the sign of the time parameter. Non-entropic orgonotic processes do not run their course mechanically; they are qualitatively entirely different from entropic processes.

Lapis Lazuli Stones resonate with the vibration of truth and enlightenment, and are powerful intense blue stones for opening the third eye and stimulating the pineal gland.The more blue in the stone, the more valued it has always been. This stone takes a beautiful polish so it is very popular.