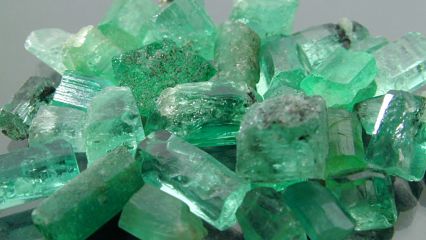 The beryl species is one of the most notable gemstone families. Many people are acquainted only with the most famous beryl - emerald. Beryl family includes several other important gemstones, including aquamarine,...

Beryl family includes several other important gemstones, including aquamarine, morganite, golden beryl and bixbite. Surprisingly, the most valuable beryl, emerald, tends to have the most inclusions and the least transparency. But emerald is famous for its incomparable color, which is due to traces of chromium.

Since the 1960s, the American jewelry industry changed the definition to include vanadium colored beryl as 'emerald', but in the UK and Europe, they are still not recognized as such. The historical green color of emerald is unparalleled in the world of gemstones and it is considered as one of the most 'precious four' of all gemstones, which also includes sapphire, ruby and diamond.

Although emeralds are one of the most valuable gemstones available today, most are very heavily included, rendering their resistance to breakage as generally poor. Corresponding Astrological signs: Taurus, Gemini, Aries