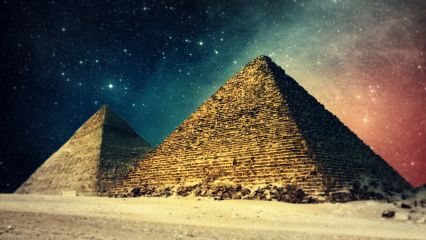 One of the Seven Wonders of the Ancient World, Egypt's Great Pyramid is thought by Egyptologists to have been built by the pharaoh Cheops (Khufu), a 4th Dynasty ruler of Egypt, somewhere between 2589-2566 BC.

Experience of Paul Brunton in the Great Pyramid i smystical experience apparently also involved astral projection. Brunton describes feeling paralyzed, his own spirit leaving his physical body and going to the 'regions beyond death'. He felt as if he were passing upwards through a narrow hole (also described in shamanic tradition) and becoming a pure mental being with a sense of existence many times more vivid than when in his physical body. He described gazing down on his prone lifeless form and noted a train of faint silvery light projecting itself from his spiritual to his physical body.

This 'cord' is mentioned by many people who have experienced astral projection. He was given various information by his ancient guides, including the fact that the Pyramid was built in the time of Atlantis, and that the Pyramid's secret chambers and ancient records were all contained within himself. He returned to normal consciousness quite suddenly, convinced that he had undergone some kind of initiation ceremony. Interestingly enough, it was the belief of occultists like Madame Blavatsky that priests of the Egyptian Mysteries used the Great Pyramid to initiate candidates into the experience of astral projection and the truth of life after death.