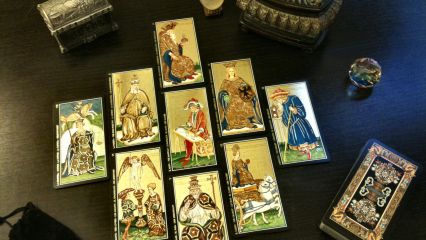 The popular rise of Tarot has been a mixed blessing. Tarot cards were until relatively recently associated in the common mind with dubious and dangerous occult practice. This entirely mistaken view has thankfully faded.

The tarot is an occult tool, but whereas the term tarot has been rehabilitated, the term occult largely has not and this word still carries negative connotations. The word simply means that which is hidden. The term has passed out of common use through a silent merger with more modern vocabulary; the word esoteric strikes less fear and the term holistic is positively cosy in comparison. Yet this discarded word still has some insight to offer since it points towards a reality that is hidden. It suggests a domain that is not immediately evident to the decoding skills of the five senses.

Moreover seeking that which is hidden requires a sustained quest and quite possibly demands the development of senses and skills beyond the ordinary. Previous and more confined mindsets defined all attempts to investigate the workings of nature and the human mind to be intrusive invasions into God’s own domain. Yet these remain the hidden and forbidden realms. So the tarot is a tool with which to navigate into the hidden realms of the unconscious and with which to create links to the domain of higher consciousness. This is its initiatory function. Divination has no role to play here.