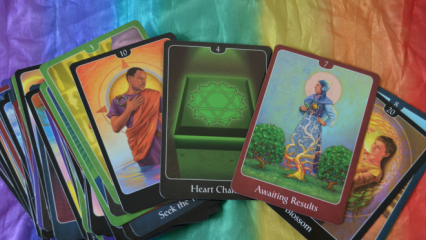 Oracle decks often differ in the number of cards. Common themes used in oracle card decks involve the power of positive thought and metaphysical beings such as angels, fairies, mermaids and unicorns. These cards are sometimes called "fortune telling packs". Some of the earlier "Oracle" or "fortune telling" cards are similar to conventional playing cards and may even carry the French suit system. These fortune telling cards often claim a "Gypsy" tradition of cartomancy and pre-date the New Age movement by a great many years.

One type of early fortune telling pack named after famous cartomancer Marie Anne Lenormand is popular in Europe. In recent history tarot cards have been used for divination, however this is not known to have been their original use. The earliest uses of tarot cards are for trick taking card games which are still enjoyed today in Europe.