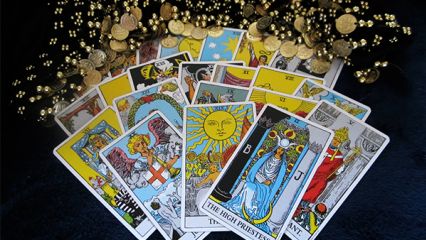 At a time of spiritual resurgence, it is no surprise that Tarot has gained in such popularity as a means of divination. Tarot reading has assumed the identity of an individual genre within the wider context of New Age spirituality. Without undervaluing its value as a psychic mirror, the transaction between reader and client is an essentially commercial interchange where power lies in the hands of the reader. Even at the close of the most insightful readings, there has been no tangible shift of power, the reader as the expert retains power, the client is not empowered through the process.

The interchange of initiation takes place not at a reader’s table but in sacred space; this is an act of commitment not commerce. Initiation brings an exchange of power between the initiator and the would-be-initiate. Separated from its mundane relation divination, the Tarot brings empowerment, which lies at the heart of the initiatory process. Shifting our perspective on Tarot requires that we enlarge our vision.

Tarot has become so commonplace that it has lost its numinous glow: Tarot packs have become so varied that the power of the symbol has been stripped and replaced instead by numerous pleasing images. This profusion, the current Tarot phenomena stands in complete contrast to the early Tarot decks which appeared from within a magical fraternity.